A little excitement today, a week earlier than expected: 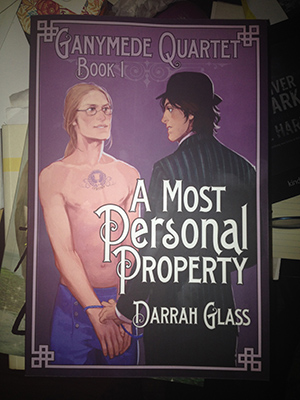 Print proof – an actual book! made of paper! – in the midst of the detritus of my desk.

Now, realistically, there are just a tiny handful of people who love me especially well who will even consider buying a physical copy, but I’m thrilled that it exists!

The print version of A Most Personal Property has A Superior Slave included as an extra in the back. Because ASS is a free story, I never planned to do a separate print version of it, but I thought it would be nice to bundle it with AMPP.

(Seriously, if I’d been thinking straight, I never would have named a book something that would result in an acronym like ASS!)